How Chiropractic Care Can Help with Crohn’s Disease 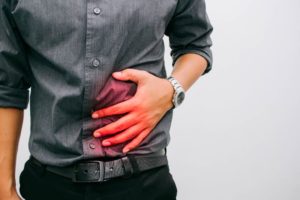 Crohn’s is a inflammatory bowel disease. Crohn’s was named after Dr. Burrill B. Crohn in 1932. Crohn’s is widespread in the digestive tract, and it can “affect the entire thickness of the bowel wall”. Because it can affect any part of the digestive tract, symptoms vary. The most common symptoms of Crohn’s disease are rectal bleeding, urgency of bowel movements, diarrhea, constipation/bowel obstruction, and abdominal cramps. Patients may experience weight loss, fever, night sweats, and menstrual and appetite irregularities. It can lead to fissures (tears) in the anus and fistula, which is a serious condition. Crohn’s is considered a “chronic disease”. A 2007 study on Crohn’s disease patients found that 12 of the 17 participants who received spinal adjustments “showed long-term and stable remission of their symptoms.” They also found “that vertebral subluxation is a common and characteristic finding in patients with allergies and Crohn’s disease.”

Typically, there is no known cure for Crohn’s but there are several methods of treatment. The most common treatment path is drug therapy and in some cases surgery. Chiropractors work to help the body heal itself. Instead of serious medications and surgeries, or perhaps as a complementary treatment to them, chiropractic may be a useful option for those suffering from Crohn’s disease. Chiropractic treatment is always noninvasive treatment first whenever possible.

If a non-mainstream practice is used together with conventional medicine, it’s considered “complementary.” If a non-mainstream practice is used in place of conventional medicine, it’s considered “alternative.” Multiple cross-sectional surveys have revealed that 51 percent of patients with inflammatory bowel disease use complementary medicine for treating their illness. These studies indicate an increase in people seeking out alternative treatment methods.

Omega-3 fatty acids (fish oil) might prevent or reduce symptoms of inflammatory bowel disease (IBD) by decreasing inflammation. A review found that while not all studies agree, research points to the possibility that IBD may, at least partly, be managed by this dietary component. A 1996 study in the New England Journal of Medicine found that Crohn’s patients taking fish oil were twice as likely to remain in remission as those who took a placebo.

Make an appointment to talk to one of our chiropractic doctors about chiropractic treatment of Crohn’s Disease.