How Chiropractic Care Can Help Treat Many Flu and Cold Symptoms… 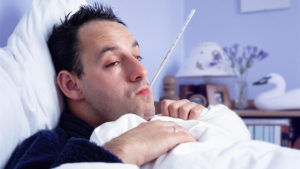 Your immune system is your primary defense against infection and your body has several strategies to ward off invaders. These include physical barriers like mucous membranes, the juices produced by your digestive track, and weapons such as a fever to wash your system of intruders.  These weapons are effective as long as they work correctly.  All too often, our bodies are not working at their optimal level.  This compromises our immune system and leaves us vulnerable to illness. Your spine houses your nervous system which controls your immune system’s response.  Hundreds of years of observation have proven that chiropractic treatment improves immune function.

Cold vs. Flu: What is The Difference?

It’s important to know the differences between flu and cold symptoms. A cold is a milder respiratory illness than the flu. While cold symptoms can make you feel bad for a few days, flu symptoms can make you feel quite ill for several days or weeks. The flu can also result in serious health problems such as pneumonia and may lead to hospitalization. Typically, flu symptoms include fever, body aches, fatigue, and dry cough.  Symptoms for the common cold are usually runny nose, congestion, and sneezing.

As you might think, bacterial infections are caused by bacteria, and viral infections are caused by viruses.  Perhaps the most important distinction between bacteria and viruses is that antibiotic drugs usually kill bacteria but aren’t effective against viruses. Viruses hijack your normal cells and use them to multiply.  Some common cold and flu viruses cannot be treated through the use of antibiotics.  However, some common bacterial infections like strep throat and urinary tract infections can be treated with antibiotics.  As antibiotic use has become widespread, some strains of bacteria are becoming antibiotic resistant.  This poses certain risks and indicates that use should be limited. Some common infections like pneumonia, ear infections, and sinusitis can be bacterial or viral. Many people turn to over-the-counter medications to mask the symptoms of the cold and flu but these often come with side effects and may or may not relieve the symptoms.

Parts of these systems include tissues, organs, bone marrow, spleen, thymus, and lymph nodes that produce and store cells that fight infection and disease. The channels that carry lymph are also part of this system. This system is a major and important part of the immune system, the lymph nodes of the body make immune cells to help fight infection. One of the characteristics of the central nervous system is the lack of a classical lymphatic drainage system. It is now accepted that the central nervous system (the brain and the spinal cord) is connected to the lymphatic system. This connection between the musculoskeletal system, central nervous system, and lymphatic system help explain how a chiropractic adjustment can improve the function of the immune system.  The chiropractic adjustment removes subluxations in the spine, which occur when a vertebrae move out of position and can prevent proper communication within the central nervous system.