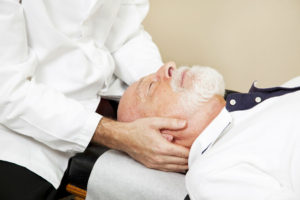 If you have neck pain caused by whiplash, you may want to visit a chiropractor who can provide many nonsurgical treatment options for relief. Whiplash is an injury to the neck muscles from rapid forward and backward motion of the neck caused by a trauma (eg, a car accident). Experts estimate that more than three million Americans suffer a whiplash injury each year. Do not ignore treatment for this pain; it can cause long tern damage.

Whiplash is the common term for “cervical acceleration-deceleration injury”. The term “whiplash” was first used in 1928 to define an injury mechanism of sudden hyperextension followed by an immediate hyperflexion of the neck that results in damage to the muscles, ligaments, tendons, discs, nerves and vertebrae – especially those that support the head. Often this pain radiates across the shoulders, up into the head, and down between the shoulder blades. When a patient experiences a sudden force that moves the neck forcefully backward then forward, the ligaments and tendons that hold the vertebrae in correct alignment are damaged. When the vertebrae change position they irritate the nerve roots. This in turns causes impairment to the parts of the body that are controlled by these nerves.

Most people associate whiplash with one vehicle being hit in the rear by another vehicle – the driver in front sustains the whiplash. However, the impact can come from any direction and the head may move backwards or sideways, not only forwards initially. Whiplash injury may also be sustained in various ways, such as from falling off a bicycle or a horse. Even from head banging to heavy metal music. Whiplash may happen while playing contact sports, or while riding an amusement park ride or any variety of different activities. There is controversy surrounding how much force is needed to cause a whiplash injury. Documented proof shows that a car accident at 5 MPH can pack enough force to cause whiplashes.

What are the Symptoms?

Signs and symptoms of whiplash usually develop within 24 hours of the injury and may include:

Be sure and seek treatment if you experience any neck pain or other whiplash symptoms following a car accident, sports injury or other traumatic injury. It is important to get a prompt and accurate diagnosis and to rule out fractures or other tissue damage that may be contributing to symptoms. Symptoms can appear immediately after the injury or there may be a delayed onset of symptoms.

If I Think I Have Whiplash What Should I Do?

Although most people are familiar with the term “Whiplash” either because we have experienced it or we know someone who has had it. But there are some myths that exist about whiplash and what best treatments are, so if you suspect that you have whiplash, it is important that you treat it properly and ensure that you alleviate the condition. The most important thing to do is to be examined and diagnosed by a reputable healthcare provider experienced in whiplash injuries. Research studies have shown that chiropractic care is effective in treating acute whiplash injuries and preventing the patient’s symptoms from becoming chronic.

What Are The Long Term Effects of Untreated Whiplash?

The term ‘soft tissue’ simply refers to anything that is not bone, such as your muscles, ligaments, tendons, nervous system, spinal discs and internal organ. Whiplash is a soft tissue injury of the neck. Unfortunately, whiplash is often dismissed as a minor or self-repairing injury, which is not always the case. If a victim of whiplash does not receive proper medical care for a whiplash injury, he or she risks developing serious complications later down the road. Patients who have a whiplash injury treated immediately suffer significantly less long term effect. Long term effects of untreated whiplash are chronic pain, loss of function, permanent damage to the vertebrae and nervous system, as well as accelerated degeneration of the cervical spine. This is why visiting the chiropractor for proper diagnosis and treatment is important to the immediate and long-term health of the patient. A study published in the medical journal Neurology found that 7.8% of the study participants “had not returned to usual level of activity or work” after one year due to issues like pain and stiffness.

Why Chiropractic Care for Whiplash?

Chiropractic care utilizes manual manipulation of the spine to restore the normal movement and position of the spinal vertebrae. It is by far the single-most effective treatment for minimizing the long-term impact of whiplash injuries, especially when coupled with massage therapy, trigger point therapy, exercise rehabilitation and other soft tissue rehabilitation modalities.