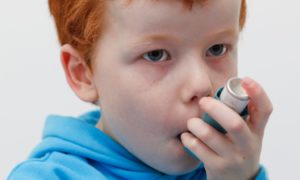 Today there are 6.8 million school-age children with asthma, which means an average of three children per classroom have asthma. Asthma has been on a sharp incline in the United State over the past 30 years. Think back to when you were in grade school. How many children with asthma did you know? You answerer may be just one. Asthma has become the leading chronic condition for children in the United States. Why are these numbers so high? Experts aren’t exactly sure, and there is likely no one answer or cause, but there are some leading theories that researchers tend to agree on.

Asthma is a very serious disease that can be life threatening in some cases. Attacks are caused by irritants such as allergens or over-exertion that cause the bronchioles, the smallest air passage ways in the lungs, to spasm and become congested with mucus. This causes a decrease in the size and patency of the airways causing difficulty in breathing, wheezing, and coughing. It is thought to be caused by a combination of environmental and genetic factors.

Leading Theories in the Rise of Asthma

Children growing up in rural areas, around animals and in larger families seem to develop asthma less often than do other children. According to the hygiene hypothesis, this is due to increased exposure to particular viruses, bacteria or parasites.

The hygiene hypothesis proposes that childhood exposure to germs and certain infections helps the immune system develop. This teaches the body to differentiate harmless substances from the harmful substances that trigger asthma. In theory, exposure to certain germs teaches the immune system not to overreact. The hypothesis states that an increase in the cleanliness of our living conditions may suppress the development of the immune system, leaving children more open to autoimmune diseases like asthma and allergies.

Increase in Acetaminophen Use ( in place of aspirin) for Children

New evidence linking the use of acetaminophen (Tylenol) to development of asthma and eczema suggests that even monthly use of the drug in children may more than double risk of asthma in children compared to those who used none at all; yearly use was associated with a 50 percent increase in the risk of asthma.

Rise in Sedentary Lifestyle and Obesity

Sedentary lifestyle and obesity is a very prevalent disorder in children, it increases the risk of childhood asthma and is the principal cause of chronic illness and school absenteeism. As with obesity, the prevalence and severity of asthma in children and adolescents is increasing. Also obesity increases inflammation in the body, which experts theorize may also play a role.

Use of Spray Cleaners

The risk of developing asthma increases with the frequency of use and the number of different products used, but on average regular use of spray cleaners and air fresheners was found to be associated with a 30% to 50% increase in asthma risk. The spray mist can irritate the lungs when inhaled.

The Chiropractic Connection to Asthma

Recently, several of the medications commonly used to treat asthma have come under scrutiny for questions about safety and effectiveness. What, then, is a good way to counter or relieve asthma symptoms? Several research articles indicate that chiropractic care can be quite useful for the management of asthma. Both parents and children have reported lowered severity of asthmatic symptoms following a treatment using chiropractic adjustments. Addition case studies have also shown a link between chiropractic adjustment and a decrease in asthmatic symptoms.

All Star Chiropractic Can Help You with your asthma symptoms.