How Can Chiropractic Care Improve Behavior in Kids with ADD/ADHD? 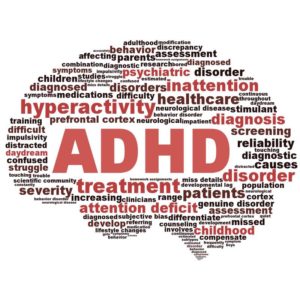 Controversy surrounds the medical treatment, indeed the very existence, of Attention Deficit Disorder (ADD), and Attention Deficit Hyperactivity Disorder (ADHD). ADD/ADHD is a condition that can affect children and adults; the data tells us that it is a huge problem in the United State. Nearly 6.4 million children between four and seventeen have been diagnosed with ADD/ADHD-a 53 percent jump from 2001.

The American Psychiatric Association states in the Diagnostic and Statistical Manual of Mental Disorders (DSM-5) that 5% of children have ADD/ ADHD. However, studies in the US have estimated higher rates in community samples.
The percent of children estimated to have ADD/ADHD has changed over time. A historical view provides the necessary context to understand changes in what we know about ADD/ ADHD, including estimates of the rates of ADD/ADHD across time, changes in diagnostic criteria, and medication treatment.

Recent surveys asked parents whether their child received an ADD/ADHD diagnosis from a health care provider. The results show that…

Some healthcare providers feel the drugging of children for ADD/ADHD has become an epidemic. Some feel that too many children have received a prescription for a stimulant medication. Hyperactivity, impulsivity and inattention in young children are normal behavior patterns. If theses behaviors (not symptoms) become excessive then seek help not a quick fix they suggest.

Could There Be Other Causes?

There may be other underlying causes such as nutrition, family environment, school or social stresses, which could be addressed first. The science behind food’s effects on behavior is still quite new. However, everyone can agree that certain foods do affect behavior. For example, caffeine can increase alertness,chocolate affect mood and alcohol can totally change behavior. Nutritional deficiencies can also affect behavior. One study concluded that taking a supplement of essential fatty acids, vitamins and minerals led to a significant reduction in antisocial behavior, compared to a placebo Vitamin and mineral supplements can also reduce antisocial behavior in children, and poly-unsaturated fatty acids have been shown to decrease violence. Since foods and supplements have been shown to influence behavior, it seems plausible that they could also affect ADD/ ADHD symptoms, which are largely behavioral. For this reason, a good amount of nutrition research has looked into the effects of foods and supplements on ADD/ADHD.

Should Caution be Used in ADD/ADHD Medication?

Caution and research are recommended for giving Ritalin and Adderall to children for ADD/ADHD. Never be afraid to ask for a second opinion. There is no means of certainty of the magnitude of long term effects of ADD/ADHD medication. There is also some evidence these medications may affect children’s social and creative development.

The main idea behind chiropractic care in ADD/ADHD treatment is that it restores optimal function of the nerve system. According the Grey’s Anatomy textbook, “All functions of the body are controlled by the nervous system.” ADD/ ADHD is a known central nervous system disorder. Gentle spinal adjustments and therapies are typically performed while under chiropractic care. Many patients and parents of patients have reported improvements in their children’s diagnosed ADD/ADHD symptoms and behaviors.